Unicorns and lawyers from BBC schools

Found in the attic squashed between the Skippy the Kangaroo TV annual and Amateur Gardening 1972. Illustrations by John Griffiths.

Of all the illustrators you’d find in a mid-century public library (in my mind, there’s a formica desk, a lightly medicinal scent of polish from a parquet floor, heavy swing doors with perfect geometry and wired glass, perhaps a square of orange carpet and a few teak chairs with brown hessian covering) Charles Keeping would be the most striking, memorable or even haunting. His images for Rosemary Sutcliff’s work send you to an eerie half-lit dawn, atop a pagan burial mound, with the ominous glint of shields on the skyline, before you’ve even touched the paper.

Keeping’s imagery is connected for me with the spectral designs of someone like Tibor Reich, thinking in particular of his work for the Shakespeare Trust at Stratford in the 1960s. This, and many other designs of the era for public spaces, take us through portals to other times and places – communicating something far beyond the scope that titles like ‘illustrator’ and ‘designer’ are meant to suggest (‘lesser than an artist’, I assume).

Of course, a Victorian Town Hall hung with Burne Jones might serve a similar purpose, but these stylised, mid-century interpretations have something hauntological about them. They don’t reassure, but unsettle.

Charles Keeping’s late widow Renate made a short film to promote the gallery of work she had curated after his death in 1988, along with much more to explore on the Keeping Gallery website.

I’ve posted a few H E Bates covers before, but just to say again, I’ve no idea why he isn’t more appreciated these days. My own feeling is that he was too prolific and easily able to turn his hand to many genres, and much of his work was eclipsed by the Darling Buds of May. That’s a great shame, because his best work is incredibly bittersweet and melancholy in a warm, Septemberish kind of way.

Perhaps the titles here fit more into the prolific, career writer category, though of course Fair Stood the Wind for France has been incredibly popular: his output during, or drawing on, World War Two fairly cornered the market, from reminiscences of a fighter pilot to celebrations of rural life that were as much a part of capturing a country’s essence as the Recording Britain artists’ project.

Again the artwork moves from the late fifties to the early seventies. The Poacher gets the inevitable lusty Panther paperback treatment. (There was certainly a slight frisson of erotica in the way his work was sometimes portrayed, as if it brushed up against Henry Miller, and as proof I remember my grandma allegedly complaining that one of his books ‘had smut in it’.)

The Fabulous Mrs V is a perfect early Seventies ode to Martini-style sophistication. Mrs V appears to be wearing tennis whites, but if you look closer it’s actually far less practical and indeed one of Margo Leadbetter’s party dresses, and she has as much connection to the racket as an artefact from an alien spaceship.

All these images are a reminder of how much has been lost in the age of digital printing: a traditional printer was a true craftsman, custodian of skills passed through generations and now lost forever. Of course letterpress lives on as a niche artisan craft, but this kind of beauty was once an everyday item, as throwaway as a paper bag. The marriage of paper and colour is incredible, the tones so pure and vivid.

Featuring papers with names like Glastonbury Coloured Antique Laid, Basingwerk Parchment, Chariot Cartridge and British Oak Parchment this is a gorgeous volume. The production values are incredible, arresting the senses at every level, and even now the scent of musty forest hangs among its leaves.

Every letter is flawlessly crisp, and touching the many silks, sheens and matts of the papers makes you feel like a Tudor merchant plunging his hands into a trove of fabrics from a newly-arrived shipment.

The jury is out these days on D H Lawrence, and yet he was as much a part of the Swinging Sixties as Mary Quant or Christine Keeler, and it’s quite entertaining to see them in the same sentence. Rightly so it would seem, as there are those who think the trial over the publication of Lady Chatterley’s Lover kickstarted the sexual revolution of the coming decade.

There’s no doubt he chimed with the sixties’ moves towards liberation and would presumably have found an ideal home in the beardy and basic drawings of Dr Alex Comfort’s The Joy of Sex. And Oliver Reed and Alan Bates’ naked wrestling in the 1968 film of Women in Love put him again in the front line of changing attitudes. Thinking he was able to write about a woman’s feelings was his downfall, but it can’t be denied he was ahead of his time, and even if a little barking mad, had a genuine, fully realised moment, which the Penguin paperbacks here reflect.

Sons and Lovers and The Virgin and the Gypsy were also filmed, the photographic stills above using an idealised ‘natural’ beauty so prevalent for book covers around 1970, just a step ahead of a shampoo advert. The illustrated versions are by Yvonne Gilbert (who gained a little more fame in the eighties for her racier work for the band Frankie Goes to Hollywood, which you might guess from The Prussian Officer) and date from the late 1970s.

The move from an advertiser’s style of photography to illustration is interesting here… before it, in the early sixties, stylised artwork was prevalent, and after it, almost hyper-real illustration gave way to the use of imagery chosen with Merchant Ivory-style attention to period detail in the eighties.

My favourite is The Trespasser, for the lovely typography (excepting the full stops) and what they do with the W, and the enigmatic, half-shadowed figure in a full summer’s meadow.

When I first discovered Josephine Poole, it was through Billy Buck (published as The Visitor in the US) and Moon Eyes which I wrote about here and here. Not long after reading those two ‘books for young adults’ I found Yokeham, which I’d read was her ‘first novel for adults’ (it’s not, that was The Lilywhite Boys, which needs a post of its own). Published in 1970, it’s set around the house of the title, ‘a brave attempt at a Palladian Mansion’, and, in another good sign, the cover illustration is by David Gentleman… 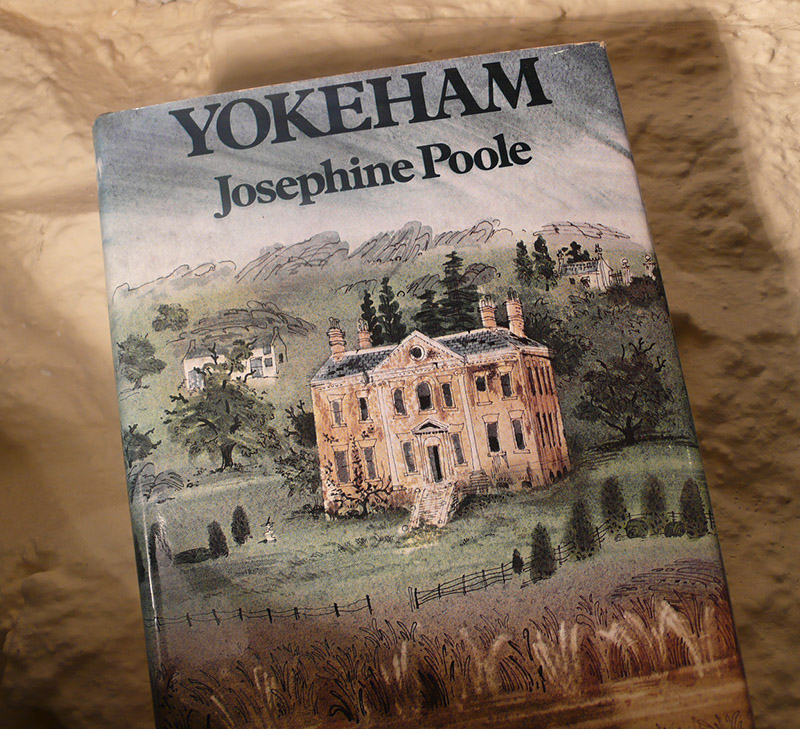 It’s a couple of years since reading, but I still have the atmosphere it left. This includes shades of Harold Pinter and Accident, and an incidental pair of sisters marooned in a hardly-visited Haversham-esque suite adorned with French sofas and pigeon droppings. The characters, if I attempt to explain the awkwardness of their situation and not the treatment, are akin to players in a rural episode of The Avengers – ones starved of any light from the swinging sixties, and cast by the local amateur dramatic group. Poole’s great skill is in exploring the dread of their predicament.

Like Billy Buck, this book’s all about a Trojan horse visitor with the power to undo. Except, this time, Poole might be echoing Terence Stamp and Theorem (minus anything racy and Italian). It’s a gradual unravelling, under skies that are leaden, in air that’s damp and peaty.

There’s a bleak and frankly unsympathetic portrait of a portly gay gallery owner, yet in this lies part of Poole’s talent – a grisly dark humour in certain situations, not a million miles from Joe Orton. Maybe she’d enjoyed Entertaining Mr Sloane too:

The door opened and Mrs Horner steered a trolley of coffee and unwontedly elaborate biscuits into the room. When she had negotiated the tapestry pouffe and a nest of tables, she turned to him with moist cheeks, and rolling up her eyes exclaimed: ‘Oh, Mr Dando, you’ve made my Frankie such a happy girl! Mr Dando? Hark at me! Compton, I must call you now; and Compton, call me Mother!’

After this novel, Poole went back to young adult fiction, a part of her talent publishers chose to focus on and perhaps at times pushed her into a particular remit, but she has continued to write until recently. In the late 90s and 2000s there was a string of acclaimed stories alongside Angela Barrett’s beautiful illustrations: non-fiction with Joan of Arc, and Anne Frank, besides a retelling of Snow White.

In 2003 she produced Scorched, a return to her trademark setting deep in the Somerset landscape, rich with folklore, the heat of summer harvest and the cool harbour of ancient houses. She certainly hadn’t lost her touch, for this is a richly atmospheric, unsettling novel for young adults, with the indecipherable haunting effect of M R James and an almost Patricia Highsmith-like exploration of duality.

On the dustwrapper of Yokeham, Josephine Poole was asked to write about herself. Later in Scorched, she explains how the idea for the story came to her ‘as we were planting spring bulbs at the far end of the garden’, a perfect image.

Anyone searching for Yokeham, which is long out of print, must be warned that the ISBN number seems to have at some point become muddled with something inexplicable but which seems to exist, being the autobiography of Gyles Brandreth. You have been warned. Check carefully first.

whistles in the wind
Blog at WordPress.com.